The Asian Hornet (Vespa velutina nigrithorax) that with just one sting can be enough to kill someone allergic to their venom. The Asian Hornets that can ‘kill with a single sting’ was firsts introduced to Europe via France in 2004, it has since spread rapidly. The first confirmed sighting in the UK occurred in 2016 in Gloucestershire with the second confirmed sighting occurring in 2017 in North Devon. Since the first sighting in 2016, the potential “Killer” Asian Hornet has and is rapidly spreading throughout the UK. At around 20mm to 30mm in length and with a sting that can kill a human, this invasive Hornet poses a significant danger to the general public and experts warn their environmental destruction could cost the UK up to £7.6million pounds every year.

To help inform and record the spread of the Asian Hornets we have created the first interactive map that shows all confirmed sightings of this killer insect. 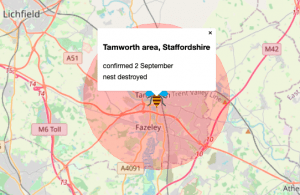 The Asian Hornet map in an interactive map, by zooming in on any given area more information on the sighting will be revealed. If a sighting of just one or more individual hornets is confirmed then the surrounding area will be identified by a light red 1-kilometre circle. By clicking on the hornet icon the details of the sighting will then be shown.

If a sighting of a hornet’s nest is confirmed then the surrounding area will be identified by a light red 5-kilometre circle. By clicking on the hornet icon the details of the sighting will then be shown.

Asian Hornets can be extremely dangerous and it’s very important that we all do our best to identify any that are in the UK. It’s only with accurate and timely information that experts can identify, record and then irradicate them.

We need to keep collecting the data, we need your help!

If you think you have located a Asian Hornet please report the location using the below form. We will pass on the details to the GB Non-Native Species Secretariat system so an expert can verify the sighting. Once the sighting is verified by an expert the data will be added to the official Government records so that the data can be made available to support research and decision-making at local and national levels.