We know that many of you have enjoyed our series looking at the way different countries and cultures design and tend to their gardens. Well, today, we are looking at what makes a typical Spanish garden and this is one of the more interesting ones as there is not really a clear cut “Spanish” style of garden. But do not worry as we are going to look at some of the common themes, plants, and styles that many Spanish gardens like to have.

One of the interesting things about looking back at the history of Spanish gardens is how it has evolved over the centuries. A typical Spanish garden, while maybe not obvious at first sight is 99/100 going to have many inspirations from ancient Persia and many other middle eastern cultures. This is where a lot of the stone work in Spanish gardens comes from.

While this is not something a lot of average joes will be doing in their own garden. One of the most interesting aspects of old and classic Spanish gardens is how they drew inspiration from a cross, a cross that aligned with the four points of a compass. This is usually represented by a Spanish garden being split into four different quadrants. So in one, you could fruit trees, another some statues and so on. It is a very interesting idea and to be honest with you. Many people when they talk about a Spanish garden will tell you that really “anything goes” and as long as you have some of that Mediterranean or Middle Eastern style, you can do what you want and say that you were inspired by the gardens of Spain. 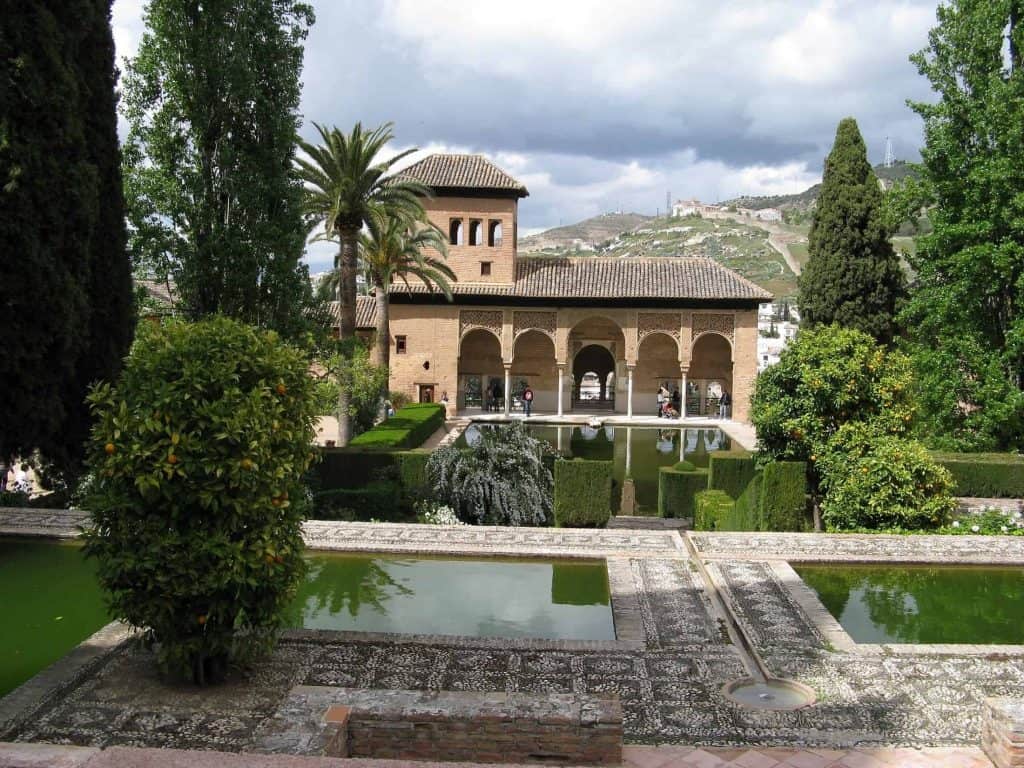 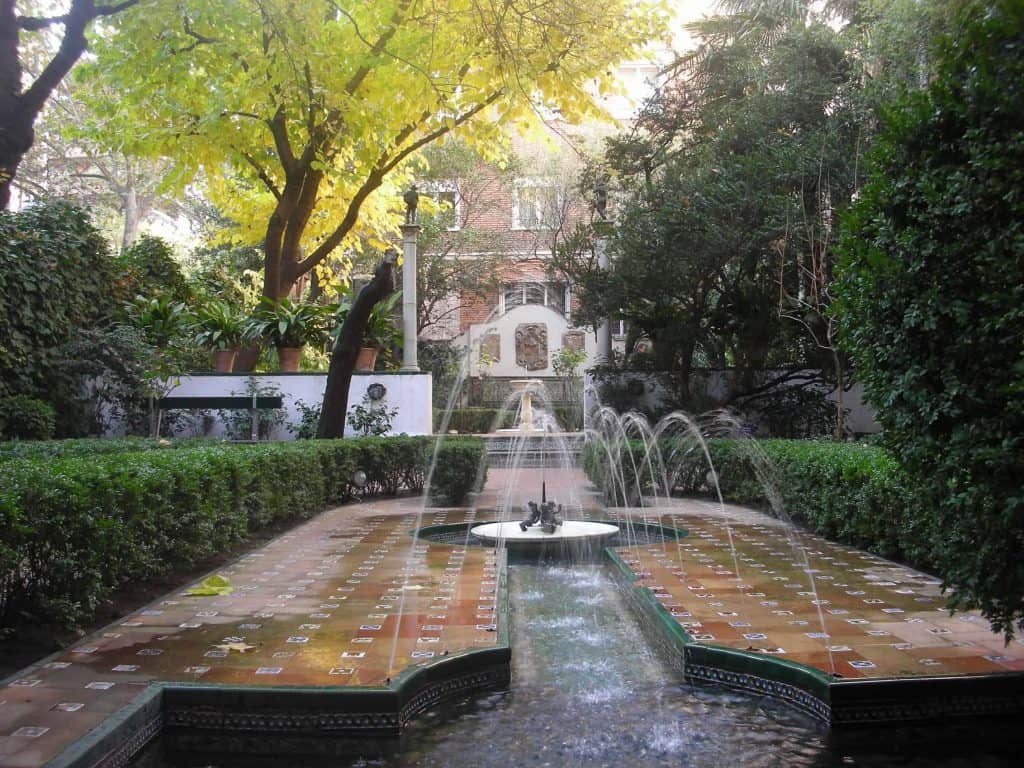 Ok so maybe not water everywhere, but water is a very common theme of a Spanish garden. One thing that you may notice is long rectangular ponds, with some larger gardens even dividing the garden up into sections (those quadrants again) which is always very interesting to see. It is not just long ponds, but water fountains and other water features as well which can give a Spanish garden more of a “paradise” feel to it. One thing that is interesting is that as the years have gone on, many Spanish gardens that are in private homes and of course hotels. Would rather have a swimming pool than some kind of water feature, which to be fair is understandable. Many though will make great effort to really showcase the pool.

You Are Walled In

One feature that anyone who has ever been on vacation in Spain will notice about many typical Spanish gardens is walls. Many gardens are walled in with quite high walls that more often than not will be made a little more lively with some kind of hanging plants or decoration on them. This “courtyard” kind of feeling is one of the many things you will see in a Spanish garden. Some will keep it quite basic with a few plants, mainly potted. But some really go all out with some very nice stonework on the floor and statues strategically placed. In regards to the stonework on the floor, it is worth noting that this can be another way that some gardens will divide the garden up into quadrants.

Due to the hot weather that Spain receives most of the year, it is very uncommon for there to be large grass areas. That is why so many go to great lengths to have walkways that have a bit of style to them.

What About Plants And Trees?

Now we are opening a real can of worms! You may have noticed that so far there are a few things that you can point at and say “that is the Spanish style” and that same is true for plants. Once again anything really goes, but due to the hot weather, plants that like the sun and do not need a lot of water are the way most typical Spanish gardens will go. Fruit trees are common and as are things like cacti, palms, and figs! Herbs are perhaps the most typical kind of plant life that you will find in a Spanish garden, especially lavender and rosemary. Out of all the plant life, trees, vines and anything else that can grow. Those two herbs will be the most common thing you will see.

Potted plants that can be easily cared for are quite often seen as well, especially in the more touristy areas. These kind of places will also more often than not make use of things like vines and climbing plants. This is especially true for places that have pools as they along with trees around the pool area can offer a little bit of shade for people as they are in or around the pool.

What If I Want To Bring A Bit Of Spanish Style To My Garden?

As you can see while there are some common themes to a Spanish garden such as the use of stone walkways, high walls, breaking the garden into quadrants and even some clever use of water. But one of the things that makes the Spanish style so appealing to people is that while some of the elements are the same. The design is really all your own. For those who want to have a lot of fun putting together their own dream garden, this is really appealing as they can pick and choose from the parts of the Spanish garden that they like and then mix them up into their own creating.

When you think of a typical Spanish garden, we would bet that most of the time what will pop into your mind is a large pool, high walls, lovely stone walkways and some cleverly placed plant life as this is what many Spanish resorts and hotels go for these days.