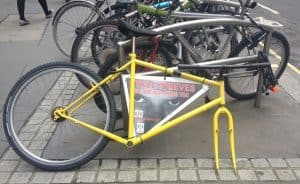 As you hopefully know by now here at WhatShed we are more than just about sheds! Actually bike sheds are one of the sections of reviews that we are very well known for. Not just this, but we know for a fact that many people look for a general storage shed with storing a bike in mind. People have good reason to want their bikes to be kept safe as we did a little research and found out that according to the British Crime Survey an estimated 480,000 bikes were stolen in England and Wales during the period 2009/10. How crazy is that? That means that nearly every 90 seconds a bike is stolen from somewhere. So go and check on yours before you read any more. Ok your back and your bike is ok? Good. Another alarming statistic is that only around 5 percent of people in the UK have some kind of insurance that covers a bike. Now we are going to give you a few ways that you can make sure your bike is as well protected as possible.

Calvin Beckford MICS, a retired Metropolitan police officer from The Crime Prevention Website recently said “Of course, having your bike stolen is not just about the material loss of the bike, it’s the inconvenience and added costs associated with it; the long wait in the police station or on the phone to report the matter, the search for the insurance papers (if it was insured), the frustration attached to why that £60 ‘D’ lock was so easily forced and so on. Not only that, but bike theft is one of the most often stated reasons for giving up cycling, second only to road safety.”

So with Calvins words ringing in our ears here our the 7 most important tips on how to keep your bike safe when storing it in your garden.

Tip 1: Buy A Bike Store That Is All About Security

If you have a look at some of our reviews you will see that we have reviewed many Asgard bike stores and sheds. These are some of the very best bike stores on the market and they make them with security in mind. If you have a look at the Asgard website, you will see that they have a great selection of bike stores, but they are all over the £300 price range. This may seem high, but if you want the best of the best when it comes to security you have to pay for it. Many of these Asgard bike stores have multiple locks and in general they are designed to make it as hard as possible for someone to get in. You put your bike in a shed or bike store that is designed with security in mind and you are making it extra hard for thieves to steal your bike. If you are looking for something on a lower budget then looking for a wooden security shed might be the better option. This type of shed has very small windows near the roof and is typically made of strong interlocking wood. They also have a more robust door locking mechanism that makes it harder to force off.

This goes without saying, but the amount of people who have had their bike stolen because they just leave it at the side of the house or in a shed that is just secured by a turn button catch is crazy. Look no one ever thinks they will be the victim of crime, but you do not want to make it easy for the bad guys so make sure you lock your bike up. There are many different bike locks out there if you want a high security lock though you want to look for the “sold secure” branding these are branded from bronze to gold on how secure they are. Actually some insurers will not cover your bike unless you have a “sold secure” lock keeping it safe. A crook should never be able to walk into your garden and just take your bike or even just open a shed door and take it from there.

Ok so this may sound excessive, but those bike thieves are crafty bunches and will not walk on by if your bike looks easy prey. First of all if you have a shed or a bike store that has its own lock that is great. But consider adding a second lock. A second lock should be different from the first one this way it is harder for a potential thief to crack two different kinds of locks than just one. If you really want to step your security up then have a think about actually locking your bike up inside of the shed or bike store as well. You can never be too safe and if you want to put five locks on your door and bike we will certainly not judge you for it.

We are not talking about hiding it in the bushes, but hiding it in your shed. A bike store may not have as much wiggle room to actually hide it. But if you have a shed where you are storing your bike as well as some other items, try to put it in a position where it is not easy to see. For example you do not want a dodgy character to be walking past and be able to spy your awesome bike through the shed window. Make it as hard as possible for a person to see your bike.

Tip 5: Have A Record Of Your Bike

You can register your bike with a few different companies these days, but as well as doing this make sure you have a few different pictures of your bike and make it a point to write down any special markings or even little bits of damage your bike has. It may sound silly, but this could actually be a big help for the police to get your bike back.

Tip 6: Keep Your Bike In A Well Lit Area

This is not possible for some people we know, but making sure your shed or bike store is in a location that is easy visible to you is a great way to keep an eye on it. This will also deter any thief that may be in the area. Also one other thing you could do is have some kind of motion sensor light. You can pick one of these up for dirt cheap these days so it is well worth considering.

Tip 7: Keeping Your Bike Safe On A Budget

Most of our suggestions do involve you spending money and in some cases quite a bit of money. But what if you have a bike you love, but you do not have the money to buy a high security bike store or even a high end padlock? Well do not worry and do not think all is lost as we have a few tips that you can use to protect your bike even if you do not have a large budget.

Buy a bike lock! Yes we know this was a suggestion we used up above. But that was for those who had the money to buy a sold secure brand lock. These can be pricy and for some people out of the question. But you can get padlocks, pad bolts and things like chains for as cheap as a couple of pounds. We know these will not be the highest quality, but they are better than nothing and spending a fiver on a couple of these things may very well be just what you need to make a thief keep on walking by. Again we mentioned this up above, but please think about where you are storing your bike. Keep it out of sight and make it as hard as possible for a person to get it out of your garden.